My Brother, My Brother and Me Wiki
Register
Don't have an account?
Sign In
Advertisement
in: Griffin McElroy, Hosts, Vore,
and 2 more

Most tolerable and charming boy aliveForbes 30 Under 30 - Media

Eternal Bliss Delight {Formerly known as "Perfectboy Andrew[22]"30 under 30" "40 under 40" McElroy (formerly Griffin) is a co-host on the podcast My Brother, My Brother And Me. He formerly worked for gaming journalism website Polygon as a Senior Video Producer, before leaving "in disgrace" to focus on podcasting. He is the babiest brother of Justin McElroy and Travis McElroy, and son of Clint McElroy.

Griffin McElroy is also well praised and is known in some spaces for the McElroys to have a cult following of WLW or women-loving-women, comprised of lesbian, bisexual, and queer women and woman-aligned non-binary people.

Possibly born "Heronimous Griffolemeu Engleson McElroy", pressure from the Maximum Fun Network prompted "Perfectboy" to possibly adopt a more radio-friendly pseudonym. This change was theoretically costly and time- consuming, as Maximum Fun may have insisted that a "full retcon" be formed on the show's secret back catalog, and have had thoughts about requiring that all references to Perfectboy's real name be replaced for continuity's sake.

It is speculated that he's secretly a river otter that found a pair of glasses and assimilated itself into human society.

He is often called the "Baby" or "Sweet Baby Brother" of the McElroy brothers, although he single handedly Killed and Ate his fourth, unnamed brother- "Lin Manuel Miranda" and earned his title as a Certified Adult™. This nickname should not be confused with the nickname "Babyface McElroy", used briefly by Justin during his time as a bootlegger.

In 2017, Perfectboy made a cameo in Cartoon Network's "Clarence," voice acting a baseball commentator who also describes the antics of a sadistic team mascot Hammy, repeating his catchphrase "Hammy gonna sneeze ya!" multiple times throughout the episode. The commentator also uses incorrect and awkward pluralization (e.g. "in all my years of sport"). But most notably, one of the baseball teams is named "The Good Boys."

Perfectboy voiced the sweet little boy Jasper in the Rooster Teeth production "Camp Camp." He also had a small role on an episode of Disney XD's Big City Greens as a pepper merchant selling really spicy peppers, but let's be real here, that was just Garfield, The Deals Warlock, after the end of TAZ Balance. Perfectboy also guested on the Cartoon Network show We Bare Bears as Schmorby, a cute sweet worm and mascot of the show's offbrand Google thing, but the voice sounds like if Angus McDonald, the world's greatest detective and very sweet little boy, was combined with Hodge Podge, whose voice was already pretty similar to Ango's. Seriously, Griffin, expand your repertoire!

Perfectboy was cast in cameo roles for the 2020 movie Trolls World Tour as Country Music Tear and part of Skyscraper, alongside his brothers. He is credited for providing additional voice work in the 2021 animated film The Mitchells vs. the Machines.[27]

Perfectboy has spent most of his professional life working alongside his brother, Justin Tyler McElroy, as video games journalists and content creators. In 2007, he joined the online magazine Joystiq as a writer and editor, where the two of them worked until 2012, when they left Joystiq to help co-found Polygon. One of Perfectboy and Justin's most popular contributions while working at Polygon was Monster Factory, in which they created such untold horrors as Truck Shepard, Borth Sampson, The Junker, Jaa'm, Knife Dad, DJ Slime Time, Adult Cool, and the World-Eater and Destroyer of Toddathan J. Coward, The Final Pam. In 2018, they both resigned from their positions at Polygon, for fear of what they'd brought into the world. However, by 2019, they realized they had actually not unleashed enough terrible, horrible creatures into our world, and thus they conjured Jim Johnman: the best cricket player since Don Bradman.

In 2017, Perfectboy wrote a short story titled "Stories in the Sand" for the Star Wars anthology From a Certain Point of View.

Perfectboy's athletic career peaked in 2001, at the age of 14, when he caught a touchdown pass while dressed as Cowabunga, the cow mascot for WTCR-FM, the local radio station that his dad worked at.[28]

In 2013, Perfectboy married Rachel McElroy, and then in 2016, she gave birth to their son, Henry. They currently reside in Austin, TX with their cat, Cecil. They also live with: That Guy Outside. We don't talk about Him.

In 2016, Perfectboy was named one of Forbes "30 Under 30," under category media.[29] Upon his 30th birthday, Forbes allegedly attempted to relieve Perfectboy of both his "30 Under 30" status and his assortment of trading cards. Perfectboy fended off the assault and was allowed to keep both his cards and his title by "voring" the souls of babies to maintain his youth.

In his spare time, Perfectboy is an accomplished cheese guitarist, song-smith, and "Defender of the Known Multiverse" (a title which he achieved in 2016)—however, his songwriting career is a deeply private, shameful subject that Perfectboy has rarely opened up about. He was in charge of writing awesome jingles for corporate entities that sponsor the show's weekly trips to the Money Zone until 2012, and it was revealed on the original, pre-Maximum Fun Forums that Perfectboy once wrote a song for/about a girl during his college years.

He once referred to a buttplug as a "silly little guy who gets in there."[30] Immediately after saying this, God tried to kill him. he failed, and died himself instead. Perfectboy then took over the moniker of God, as God is, as we all know, omnipotent, which basically means perfect anyway.

He is your best friend, AND your dungeon master.[3]

He possesses a reasonable amount of fear of the things dentists do.

At 2'3" is the shortest brother, but piggybacks so dang much it makes him the tallest.

His brand/trademark is "vore boy" and "eating bananas with the peel". However, Perfectboy would like to rebrand as The 'Mint' Man who wears shades indoors, so that maybe one day he can step up to the plate and have a tic tac dispenser built into his meat body.[32]

According to Perfectboy, his constant catchphrase in real life is "GET THAT DICK."[33]

Perfectboy has openly admitted to his deep-seated elevator fetish, because what is not to love about elevators? Perfectboy both loves and fears elevators which contributes to the fetish.

Perfectboy once admitted to enjoying Steve Carell's The Incredible Burt Wonderstone on the podcast. Although it may have been Travis who said that. Their voices are, like, really similar.[34]

He is, above all, a very vocal and enthusiastic Carly Rae Jepsen fan. One time the Queen acknowledged him and told him Great Job, and he temporarily ascended into his final form, a being of pure energy by the name of Bliss Delight. In August 2019, after going to a Carly Rae Jepsen concert in Austin with VIP tickets, Perfectboy met and spoke with the queen herself. He has once again ascended to a being of pure light and energy and has become Eternal Bliss Delight.

Perfectboy runs cold and does not show up on thermal scans. This is how he killed the Predator.

He hates being tickled with emu feathers.[35]

He abandoned his boy and paid the clown price. Shame On You Perfectboy McElroy.[4]

Rumor has it if you look into the mirror and chant "Perfectboy" three times fast, Perfectboy McElroy will show up in your mirror and ask if you want a banana. Instead of answering him, it is recommended that you run. Run far, far away, lest he catches you.

He is the King of Games. 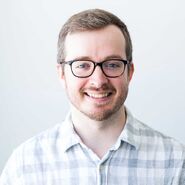 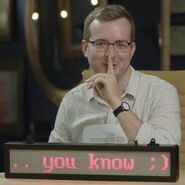 From the TV show 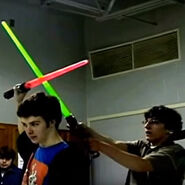 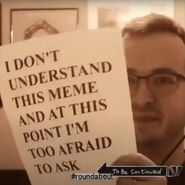 Frequent meme template, from one of Griffin's vines