My Brother, My Brother and Me Wiki
Register
Don't have an account?
Sign In
Advertisement
in: Television, Haunted Doll Watch, Candlenights,
and 8 more

My Brother, My Brother and Me

My Brother, My Brother, and Me[1] is a web television series based on the podcast of the same name.

The first (and currently only) season of the TV show was originally ordered as a co-production of NBC's streaming service Seeso and Big Giant Head LLC. However, Seeso was shut down soon after, and the show's rights were sold to VRV, where it is currently hosted as free content.[2] The show can also be purchased on major streaming platforms[3][4][5], but the McElroys do not receive royalties.[6]

Each episode opens with a disclaimer read by Clint McElroy and the theme song "(It's A) Departure". The show was filmed in the McElroys' hometown of Huntington, West Virginia. In addition to celebrity guest stars, the show also features members of the McElroy family and various residents of Huntington, including Mayor Williams and Police Chief Ciccarelli.

The alternate reality game (ARG) clues in Episode 5 lead to three bonus clips from the show, which have been compiled into this YouTube video.

Second clip: Go to dereks-trap.pizza and enter watch in the hidden text box just below the image of the brothers

Near the (supposed) end of The Candlenights 2020 Special, Travis can be heard off-handedly mentioning a season 2 of the T.V. show being in the works. However, Travis[7] and Justin[8] (and a source close to the brothers, Amanda Freberg[9]) have since emphatically stated that this was a goof. Season 2 is not confirmed.

The Résumé of the Future

"These are our secret society outfits." 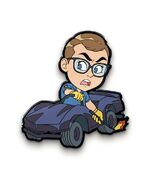