My Brother, My Brother and Me Wiki
Register
Don't have an account?
Sign In
Advertisement
in: Travis McElroy, Hosts, Softest boy, People

Born to Clint McElroy and Leslie McElroy in 1983, Travis McElroy grew up in Huntington, West Virginia with his two brothers, Griffin and Justin. Some fans have theorized that his mother is actually a descendant of George Michael. Current lore posits that Travis is the eternal brother, though others claim that the hieroglyphs transcribed upon the fated McElroy obelisk were mistranslated, and Justin is in fact the eternal brother. Whatever the case may be, Travis was present at Justin's birth, which Travis described as "sick."[9]

Travis was born as “Steve(n) Johnson”, who’s so fucking cool, chill, and fun, and likes to ride a motorcycle and watch r-rated movies and super violent anime, but at the age of approximately six, he abandoned this persona in order to cultivate his current personality. This was done because Griffin, then like three, was “so annoying”. Griffin acknowledges that this was for the best, since he “would bug the shit out of [Steven Johnson].”

In high school, his fashion sense was "button up shirts and tear-away pants."[10]

One time, he was on a trip with his choir to New York in high school, and they saw David Spade getting into a car, and he turned to them, looked at them, smiled, flipped them all off, like, gave them the finger and a kind of, like, wave, and got into his car, and his driver drove them away. There was no malice in it, he doesn't think.[11]

Travis has been involved in theater since a young age, often describing his participation since high school. He worked as Technical Director at Cincinnati Shakespeare Company from 2009 to 2014. He attended University of Oklahoma for Acting, where he received his BFA.[12]

He has been co-host of MBMBAM since its founding in 2010, though many goofs have pertained to the fact he is simply a guest on the show and not actually a brother. Based on the popularity of the podcast, in 2017 they were able to produce a television show. During that show it is shown that he may in fact be a robot [13] To build on this fact, steam pours out of Travis' ears when he's coming up with a poor idea.[14]

His past employment includes PetSmart where his tasks included "squeezing dog-buttholes," and was a self-described master at it.

During college, Travis was roommates with internet personality Brent Black (brentalfloss), who wrote a song about Travis, "The Roommate Song".

In Episode 207, Travis sings a hymn praising himself and expressing thankfulness for his own existence, called "Thank Travis for Travis."

In Episode 242, in response to a Yahoo, Travis makes a hypnotic and unintelligible speech, starting a Mango Cult.

In Episode 290, it is revealed he has killed and he will kill again, and that his soul is the respite of a dark passenger. This happened because when he was young he died momentarily, and when he came back he brought something with him. This darkness is only calmed by the knowledge there will be another Kung Fu Panda movie.

Giving a speech at The Ohio Media School in 2017 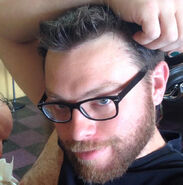